Michael I. Jordan, the 2022 WLA Prize Laureate in Computer Science or Mathematics won the award “for fundamental contributions to the foundations of machine learning and its application.” Jordan is now Professor of Department of Electrical Engineering and Computer Sciences and Department of Statistics, UC Berkeley.

Dirk Görlich, the 2022 WLA Prize Laureate in Life Science or Medicine, was awarded the prize “For key discoveries elucidating the mechanism and selectivity of protein transport between the cytoplasm and nucleus.” Görlich is the Scientific member and Director with Max Planck Institute for Multidisciplinary Sciences. 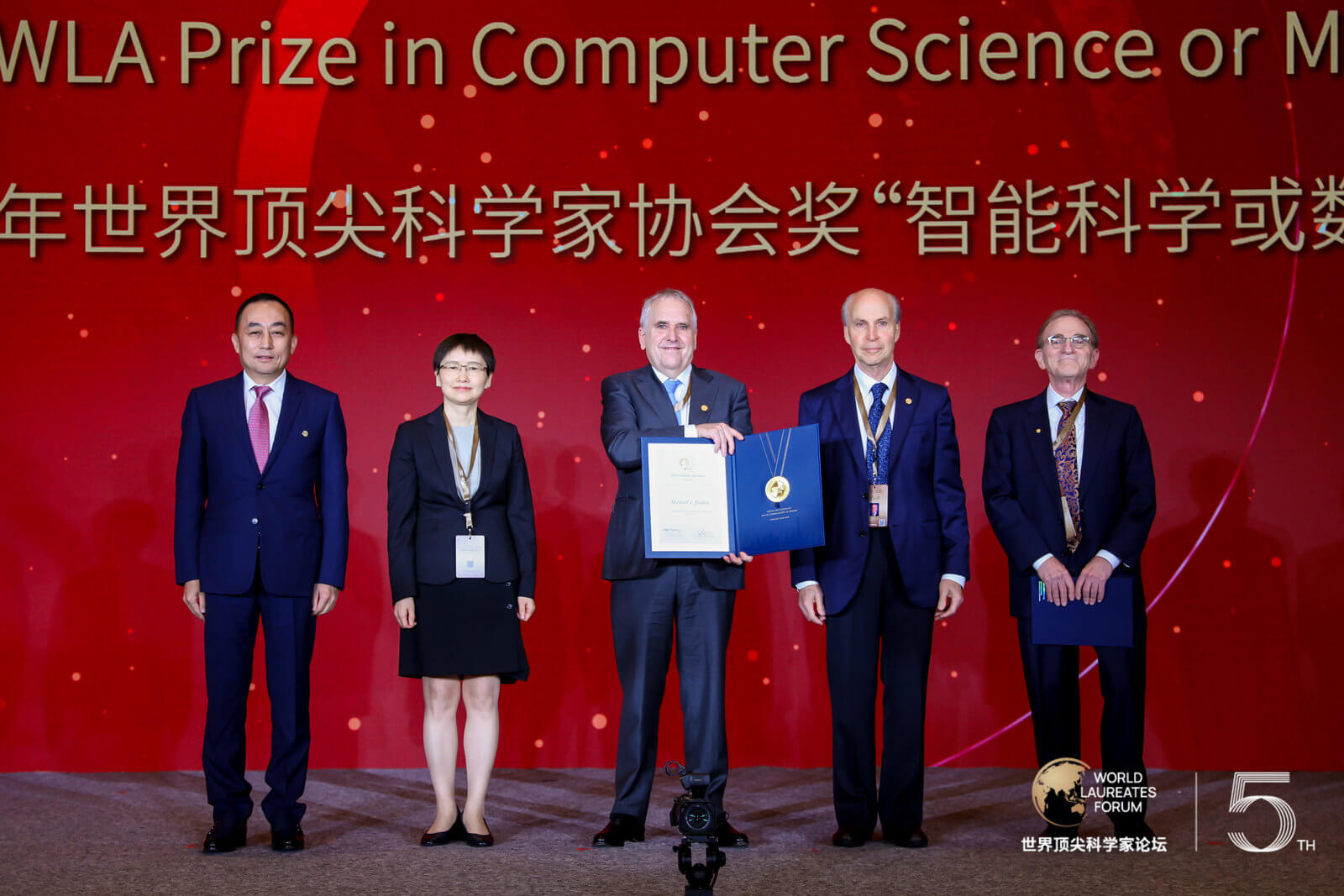 American computer scientist and statistician Michael I. Jordan is awarded the 2022 WLA Prize in Life Science or Medicine on Nov. 6. 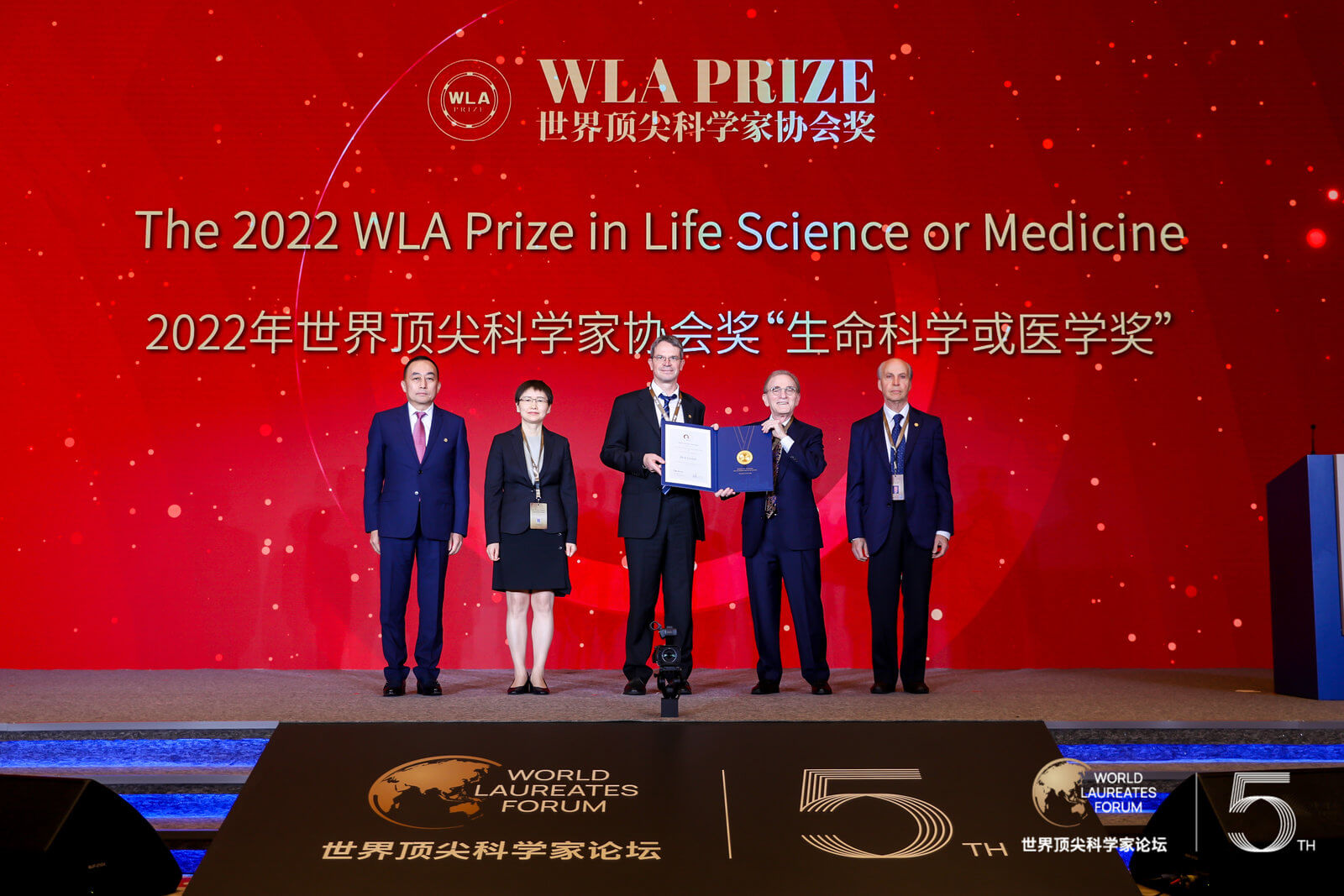 German biochemist Dirk Görlich is awarded the 2022 WLA Prize in Life Science or Medicine on Nov. 6.


In his prize acceptance speech, Jordan encouraged youngsters to explore and learn widely and then choose one field to carry out more profound research. He also predicted that a new discipline in engineering based on Intelligence Science, Statistics, and Economy would soon come into existence, leading the world to a multi-data era. The first discipline in the engineering field was closely related to users' preferences, values, and decisions. According to Jordan, the three missions of the World Laureates Association (WLA) went along miraculously well with what people expected from Machine Learning and Artificial Intelligence in the future, with them unanimously agreeing that international cooperation would lead to prosperity. 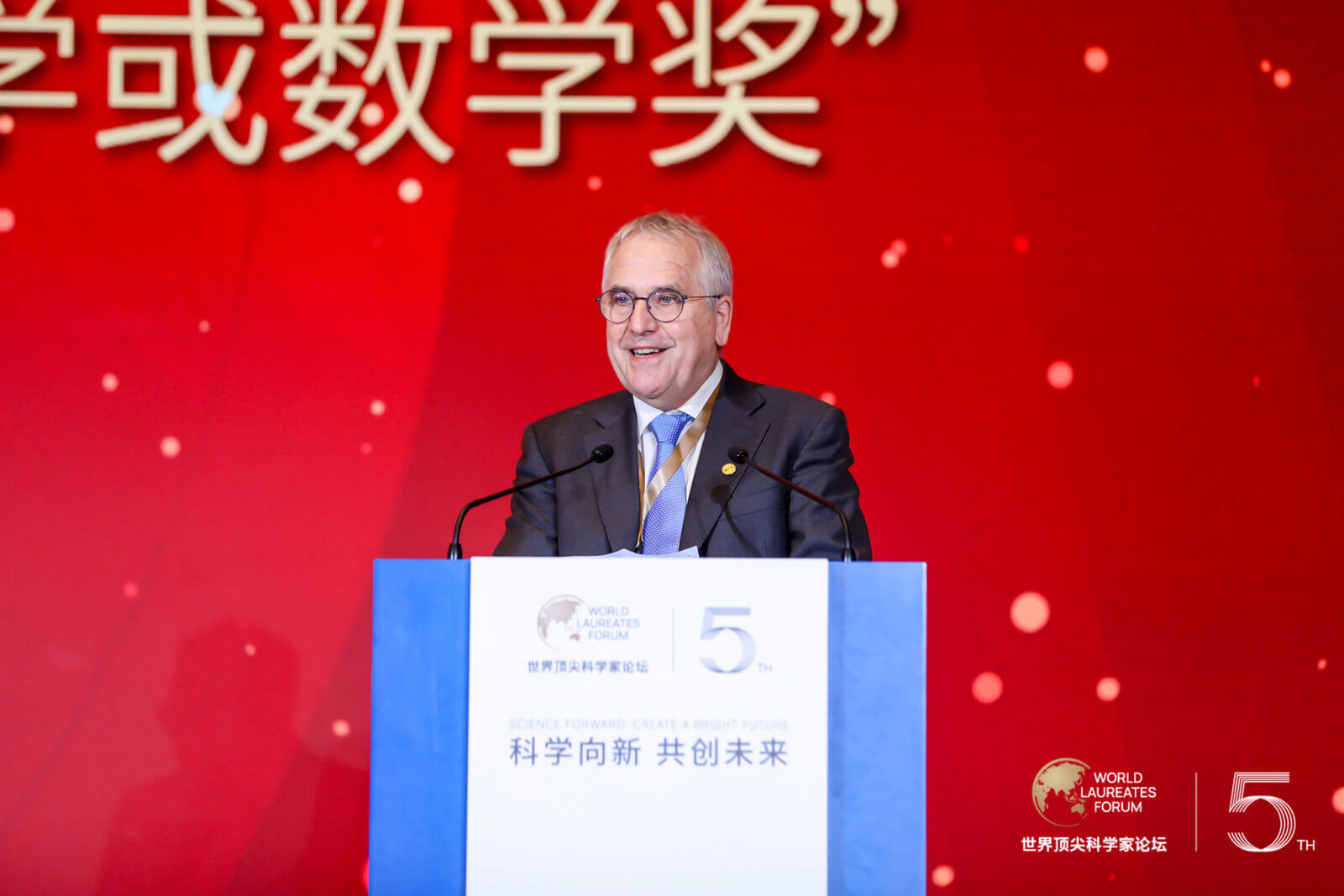 Michael I. Jordan delivers an acceptance speech at the Award Ceremony of Inaugural WLA Prize held in Shanghai on Nov. 6.


For Görlich, the extended research career he had gone through to discover and elucidate the mechanism and selectivity of protein transport between the cytoplasm and nucleus and the due academic recognition coming along with the WLA Prize made the prize so precious for himself. What he and his team had discovered had been recognized as the world-leading scientific discovery--nuclear pore complex. “So receiving WLA prize today is a wonderful recognition for a long and exciting journey,” he said. 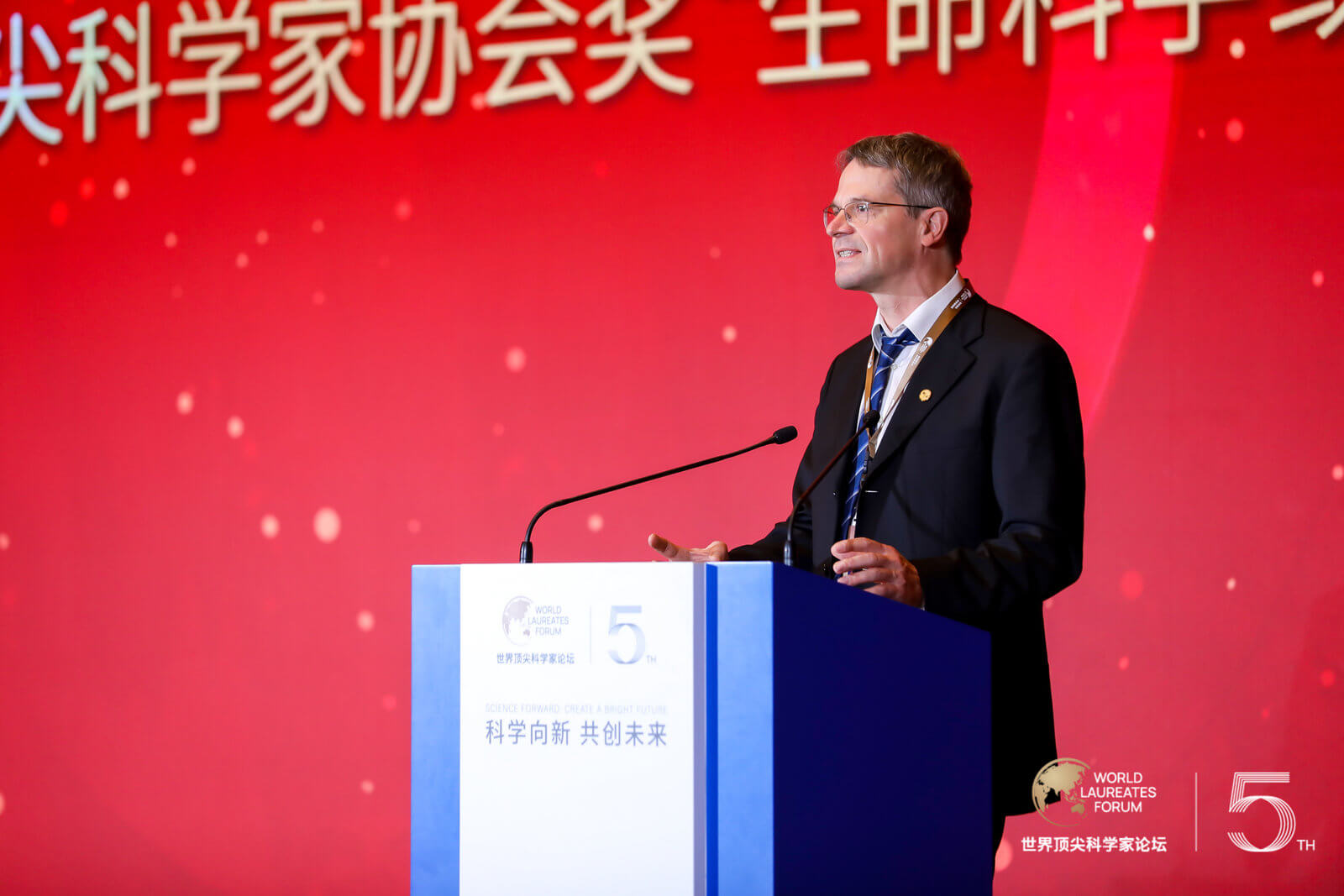 Dirk Görlich delivers an acceptance speech at the Award Ceremony of Inaugural WLA Prize held in Shanghai on Nov. 6.

John Hennessy, 2017 Turing Award Laureate and Chairman of the WLA Prize Selection Committee, delivered his prize-given speech for the Computer Sceince or Mathematics award via a video, and in his speech, he emphasized the significance of establishing the WLA Prize in Computer Science or Mathematics for scientists in the relevant fields. Thanks to the achievements in those fields, life has largely facilitated. Therefore, the WLA Prize would make a significant difference in helping to consolidate the foundation and stimulate the rapid growth of Computer Science and Mathematics. Meanwhile, the WLA Prize also inspires young people to ponder the importance of science technologies and research regarding fundamental theories of the disciplines, said Hennessy.

"The fundamental discovery of this mechanism and how this process has been organized is important for basic science and many clinical applications," Randy Schekman, 2013 Nobel Laureate in Physiology or Medicine and Chairman of the WLA Prize Selection Committee, said in his prize-giving speech. The profound discovery would deepen the understanding of the information seflow in the pore complex, he noted. Schekman said that Görlich deserved the WLA Prize of the year. He expects "to find people who were out there doing great things that just somehow have been overlooked" again in the selection of the following WLA Prize in 2023.

Roger Kornberg, 2006 Nobel Laureate in Chemistry, Chairman of the WLA, mentioned that following the WLA's vision of "Science and technology for the common destiny of mankind," the WLA Prize was striving to fulfill the Association's three missions: promoting basic science, advocating for international cooperation, and supporting the development of youth. The prize's establishment is in a bid to announce support for cutting-edge science and technology and basic science, which should be a key message for the selection committee and the general public to know. The philosophy shall reach more people through media, he said. In addition, he pointed out that the WLA Prize shall cultivate future research and insights into human science and technology as an international prize and would identify the best-quality seeds for future discoveries in the world's leading scientific and technological fields. The Selection Committee, consisting of world-leading scientists, would select nominees from all over the world.

Neil Shen, Founding and Managing Partner of Sequoia China, Founding Member and Vice Chairman of the Inaugural WLA Entrepreneurs Advisory and Collaborative Committee, expressed that the establishment of the WLA Prize responds to new demands and trends of scientific and technological developments. "Science and technology today is making more breakthrough in interdisciplinary and cross-disciplinary fields; that is why the WLA Prize is awarded in two interdisciplinary categories to recognize disruptive achievements in this regard. We hope the WLA Prize can help scientists build a more effective platform to spread their research and findings, and help create a more vibrant and inclusive ecosystem to encourage scientists to explore the uncharted territories and look for their own ‘eureka moments’", said Shen.

About the WLA Prize

The WLA Prize aims to recognize and support eminent researchers and technologists worldwide for their contributions to science. It is intended to support global science and technology advancement, address the challenges to humanity, and promote society's long-term progress.

The total award for each Prize, which may be divided among up to four laureates, is RMB 10 million.

The World Laureates Association (WLA) is a non-governmental and non-profit international organization. It is one of the world's highest profile organizations of laureates with three missions: advocacy for basic science, promotion of international cooperation, and support for young scientists. Upholding the vision of "Science and Technology for the Common Destiny of Mankind," the WLA is committed to enhancing the academic exchange of ideas and research among scientists and scholars in China and the world.

The WLA Foundation supports all WLA activities and is funded entirely by donations from private sources.

Sequoia China helps daring founders build legendary companies. In partnering with Sequoia, companies benefit from its unmatched community and the lessons Sequoia has learned over the years. As "The Entrepreneurs Behind The Entrepreneurs", Sequoia China focuses on three sectors: tech, consumer and healthcare. Over the past 17 years, Sequoia China has had the privilege of working with more than 900 companies. It is committed to advancing innovation in science and technology. It actively supports scientists and entrepreneurs, promotes technological innovation, and nurtures leading tech-enabled enterprises, with a concern for corporate social responsibility. As the exclusive sponsor of the World Laureates Association (WLA) Prize, Sequoia China hopes that its support will encourage the pursuit of innovative scientific developments and drive growth across the world.